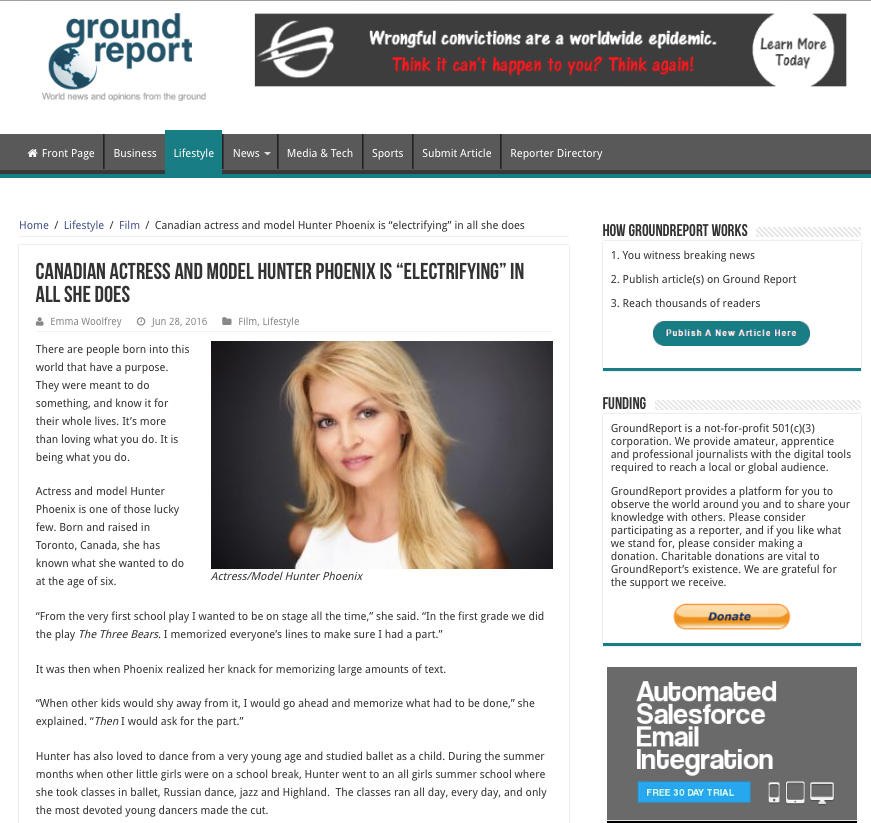 There are people born into this world that have a purpose. They were meant to do something, and know it for their whole lives. It’s more than loving what you do. It is being what you do.
Actress and model Hunter Phoenix is one of those lucky few. Born and raised in Toronto, Canada, she has known what she wanted to do at the age of six.
Actress/Model Hunter Phoenix

“From the very first school play I wanted to be on stage all the time,” she said. “In the first grade we did the play The Three Bears. I memorized everyone’s lines to make sure I had a part.”
It was then when Phoenix realized her knack for memorizing large amounts of text.
“When other kids would shy away from it, I would go ahead and memorize what had to be done,” she explained. “Then I would ask for the part.”
Hunter has also loved to dance from a very young age and studied ballet as a child. During the summer months when other little girls were on a school break, Hunter went to an all girls summer school where she took classes in ballet, Russian dance, jazz and Highland. The classes ran all day, every day, and only the most devoted young dancers made the cut.
Seeing her daughter’s love for both theatre and dance, in a flash of brilliance Hunter’s mother enrolled her in Theatre Dance classes at a prominent local theatre. Here, young people were groomed to perform and stage and the classes soon turned into chorus line work in musical theatre.
Spotting the talented teen, one of the theatre’s directors encouraged Hunter to audition for lead roles. Again, she was cast the very first time she went out. Phoenix continued to study theatre arts during her post secondary schooling, and has stayed true to this practice throughout her acting career.

“I love exploring human behavior and the human psyche to create really detailed and fully developed characters. I love studying the nuances of relationships; friendships, family relationships, professional and romantic relationships, and to breathe truth and depth into characters. I have so much fun ‘playing’ with other actors, living out alternate realities without real world consequences. The variety acting has brought into my life, working with so many different people, of varied backgrounds and in diverse locations, has afforded me a remarkable variety of experiences. I have even learned to love auditioning. It’s always a chance to meet new people and have a new experience. It’s the constant change of the job juxtaposed with the intricacy, intimacy and depth of each character’s life that is so stimulating. ‘Living other people’s lives’ has on many occasions taken me on a deep dive of my own soul and psyche.”
Phoenix understands the complexities of acting, and says it has been a catalyst for personal growth in her life.
“Acting forces you to confront your own limitations, insecurities and perceptions. This can make for some difficult and emotionally painful experiences. Emotionally, there is often no where to hide. It’s like forced therapy with no one to hold your hand through it – gruelling but transformative.” she said.
Hunter’s commitment to her craft throughout her career has impressed everyone she has worked with. Michelle Danner, a director, producer, and founder of the award-winning All In Films cast Phoenix in films The Bandit Hound and The Bandit Hound II, and describes her work as “electrifying.”
“When I first became acquainted with Hunter, it was in classes that I teach at the Edgar Center. Ms. Phoenix came to me as a student wishing to further her studies and strengthen her skills as an actress. But when Hunter took the stage, I was surprised by her presence and strength and genuine warmth. Her creativity, versatility and deeply rooted truthfulness were unexpected and a joy to watch. She is deeply emotional with intense inner dialogue which are qualities crucial to being an exceptional actor,” said Danner. “I knew right away that it was imperative that we find a part for her in my next movie.”
Danner believes Phoenix is unique due to her extraordinary ability to dig deep into the soul of the character she is portraying and then to find the similarity within herself and share the inner part of herself with the world. This is a sentiment shared by Michael Stevenson of Fade to Black Films, who has worked with Phoenix over the last 20 years.

“There was never a time when I didn’t feel the immense presence of Hunter’s work,” described Danner. “As a casting director, I rarely come across talent as unique and hard working as Hunter. She is one of the few remarkable people who will inspire you professionally and at the same time touch your heart.”
Over her successful acting career, Phoenix has worked alongside many talents such as Oscar-winner Christoph Waltz (Django Unchained) on the film Death, Deceit & Destiny Aboard the Orient Express. She also has had the chance to work with Malcolm McDowell (A Clockwork Orange), Mariska Hargitay (Law & Order: Special Victims Unit), Jennifer Esposito (Crash), Chris Penn (Reservoir Dogs), and Jada Pinkett-Smith (Collateral).
Many of the films she has appeared in have been celebrated adding to her extensive list of acting achievements. Her film Eight Days a Week appeared at the Sundance Film Festival, the Hermosa Beach Film Festival, Williamsburg Brooklyn Film Festival. One Tough Cop screened at the Oldenburg International Film Festival. She also attended the Cannes Film Festival as a guest with Towers of London Films for several years.
It is not just acting which has brought Phoenix international recognition, but also modelling. Originally working in a bar after university, her manager advised her to go to an open call for a Budweiser ad, where she was chosen over 400 other women. She was instantly a “Bud Girl.”
“I became a brand ambassador, touring local bars, making appearances and handing out Budweiser swag. It was a really fun time in life,” she described. “Who doesn’t like to see a pretty girl at a bar giving away free T-shirts, hats, beer paraphernalia and even free beer.”
The visibility allowed Phoenix to get an agent fairly easily and she started doing a lot of beauty work. This led into commercial on-camera work.
“Modeling, although you are expected to be physically perfect all of the time, in many ways is much easier than acting. Acting requires you to do a lot of homework before you even go to the audition, and it’s different and time consuming every time,” she described. “Modeling you just have to turn up and look good every time. And what woman doesn’t want to look and feel beautiful?”
Phoenix’s modeling career is expansive and impressive. From Mercedes Benz to Doritos, she has been sought out to appear in variety of ads demonstrating her versatility.
“Hunter is one of the rare models who can book work across many genres making her a highly valuable asset to any agency,” said Alex Haddad of BMA Models Agency, who has worked with Phoenix for many years. “She demonstrates a consistent level of professionalism and earning ability crucial to the success of any agency.”
After having decades of success in both acting and modeling, Phoenix is ready to start the next chapter of her life and career.
“I’ve spent the last 2 decades working around the world, exploring different cultures, and finding myself more in the process,” she said. “Now I’d like to settle down in one place primarily and really build my career out more. I want to take on even bigger and more in-depth roles. Also, to really collaborate with creative people in the film and television industry and to produce cool projects that we all love and are proud to work on. In a way, building out the industry and giving back at the same time.”

Canadian actress and model Hunter Phoenix is “electrifying” in all she does – GroundReport 6/29/16, 10:13 PM

Canadian actress and model Hunter Phoenix is “electrifying” in all she does
Emma Woolfrey ” Jun 28, 2016 # Film, Lifestyle 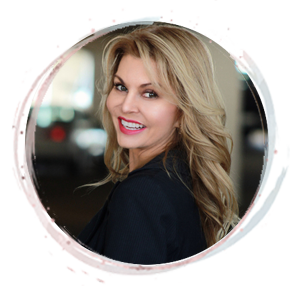 "What I’ve done doesn’t begin to tell the story of who I am. It can’t. Not for any of us. We are all far more interesting and complex than that. But I can tell you that acting has been the framework for my life. It has taught me many intricacies of human behavior and allowed me profound insight into myself and others. For this I am deeply grateful." 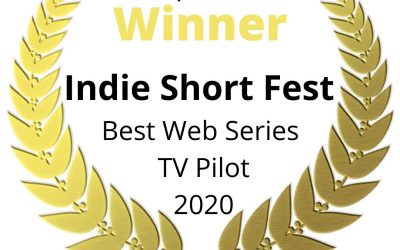 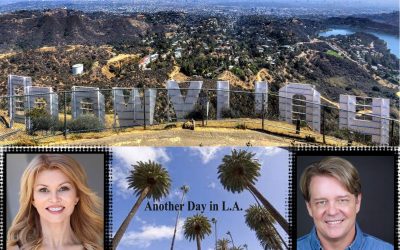 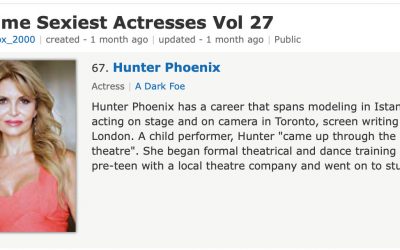